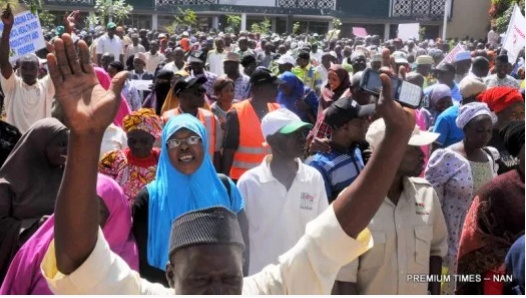 The Kaduna State Universal Basic Education Board (SUBEB) has shortlisted 27,639 applicants for oral interview in its ongoing recruitment of 25,000 teachers for the state’s public primary schools.

The figure represents the number of successful applicants out of the more than 43,000 who sat for the aptitude test conducted on Dec. 20, 2017.

The list, pasted at the board’s headquarters in Kaduna on Saturday evening, indicated that oral interview would start on Jan. 24, at the Local Government Education Authority (LEA) offices in the 23 local government areas of the state.

Signed by the board’s Executive Chairman, Nasiru Umar, the list added that successful candidates would attend the interview in their respective local governments, while applicants from other states would be interviewed at centres nearest to them.

Applicants are advised to check their names at the notice board of the Education Secretaries in the 23 local governments, as well as SUBEB headquarters.

The News Agency of Nigeria (NAN) reports that the recruitment is being conducted to replace the 21,780 primary school teachers sacked for allegedly failing competency test organised by the state

The sack of the teachers over poor performance generated protest and strike by Nigeria Union of Teachers on Jan. 8.

The strike was, however, called off after 10 days when the state government announced a second chance window for the sacked teachers to reapply under SUBEB’s continues recruitment exercise. (NAN)ww