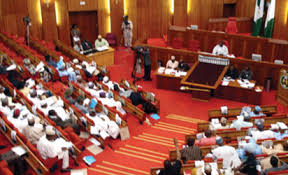 Senate, yesterday, revealed that about
N200 billion education tax collected
between 2012 and 2013 were diverted
to unknown and unspecified uses not
recognised in or permitted under the
Act setting up the Education Trust
Fund.
The funds were diverted during former
president Goodluck Jonathan’s
administration. A probe was
subsequently ordered.
The revelation was contained in a
motion sponsored by Senator Abdullahi
Aliyu.
Senator Aliyu noted that some
institutions got multiple allocations of
special intervention, while institutions
that are their peers did not receive
any within the period under review.
“About N200 billion of education tax
collected between 2012 and 2013 were
diverted.
“Tertiary Education Trust Fund Board
granted a loan to the Federal Ministry
of Education and also organised a
workshop and pre-retreat in the United
States of America and Kenya in
2014-2015 without recourse to
guidelines of the Act.
“About N500 million was budgeted for
advertising and media in the 2015
budget which contravenes the
rehabilitation, restoration and
consolidation of tertiary education in
Nigeria, in accordance with Section
3(1) of the Tertiary Education Trust
Fund Act 2011.”