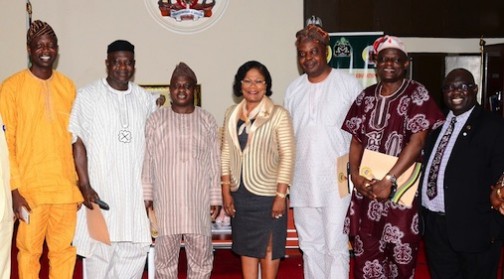 House Committee on Information and Strategy,

visit to the Deputy Governor in her office .

Laoye- Tomori has again debunked the rumours of

the alleged plan to scrap some of the tertiary

institutions by the state government.

Laoye- Tomori said this while briefing members of

the State House of Assembly Committee on

Education over the development in the education

She said the government had advised the

Institutions to harmonize some of the courses in

duplication of courses and ensured that

graduates of the institutions acquired

appropriate skills that could make them self

sustaining after their education .

“ The Government has directed the forum of

Chairmen of the Governing Board of the

Institutions to review their programmes and come

up with a Position Paper on how to make our

after graduation. We want our Polytechnics to

run Courses that would meet the need of the

Nation and make the graduates self reliant .

“ Towards this end , the Government has directed

all the tertiary institutions to devote 50 per cent

of their admission quota to their main

programmes, 25 per cent should be devoted to

Remedial Programmes to cater for the teeming

youths that could not gain admission to any

“ Finally, the Polytechnics are to devote 25 per

cent of their admission to Vocational , Technical

and Skill Acquisition Courses where Graduates

that want to acquire such Skills can enroll , and

where Artisans that want to sharpen their skills

and acquire certificates can equally be admitted

while the Colleges of Education are to devote 25

per cent of their admission quota to running of

Continuous Education Programmes for training of

teachers from all over the State and beyond .

“ This is to ensure that we produce graduates

that will be useful to themselves and be able to

establish their own businesses after graduation

as well as ensure sustenance of well trained

teachers in elementary and Secondary Schools in

the State . There is no plan to scrap any of the

four Tertiary Institutions , we just want them to

According to her , the government is still

expecting the Position Paper from the Forum of

the Governing Council Chairmen before

Earlier , the Chairman , House Committee on

government for the way it has handled naughty

issues in the areas of education in the state.

He said the series of controversies that had

ensued over the education policies of government

was an indication that it is committed to get

things done in the sector by not dodging the

issues, but proffering solutions to them.

that the government should come up with

ingenius ways of sustaining the system and

increasing the quality in the system .

He passed vote of confidence on the government

on the way it has been handling the education

system , saying , the Assembly would be coming up

with ideas to assist the government in realising

its goal on the education .