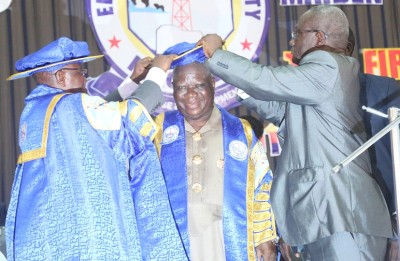 held its maiden matriculation and installation

of Chief Edwin Clark as its Chancellor. Edwin

Clark University is one of the private

universities granted license at the twilight

of the tenure of the administration of

former President Goodluck Jonathan by the

the occasion to challenged eminent Nigerians

to always contribute to the growth of the

society by investing in the education of the

youths. According to Governor Okowa,

“investing in education ensures a positive

future for our children,” assuring that his

administration was committed to the

development of education in the state.

“Education is a core value of my

administration and we wish that all Deltans

are educated because education ensures a

positive future for the people,” the Governor

He lauded Chief Edwin Clark for setting up

the University, observing that, the

establishment of the university was a clear

evidence “that no matter your age or

financial symbol, you can attract

development to your community.”

“You (Pa Clark) are bequeathing a legacy,

you have always been a shining light; we say

thank you for bringing a university to this

serene town; you have set an example that

many Deltans will emulate and we encourage

Deltans to establish universities and engage

in developmental programmes in their

communities,” the Governor reiterated while

urging the matriculants to desist from

life to the devil,” adding that cultism affects

Chief Clark at the occasion commended the

“your government has been very kind to us

and very cooperative towards development

He called for the establishment of more

universities, observing that education should

be within the reach of the people.

The Vice-Chancellor of the University, Prof.

Timothy Olagbemiro, said the university was

fully residential and has zero tolerance for

at the occasion which was attended by Prof.