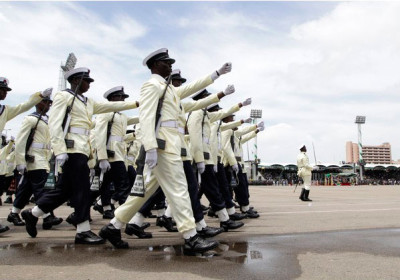 THE Nigerian Navy Basic Training School Onne,
has signed an agreement with the University of
Port Harcourt, to start a Diploma program in a
Leadership and Management Course for naval
personnels’. The aim is to train officers in
modern ways of curbing various forms of crimes
in Nigeria’s maritime environment and in other
parts of the country.
The Chief of Naval Staff, Vice Admiral Ibok-Ete
Ibas, while signing the Memorandum of
Understanding at the Naval School Onne, Rivers
State, said the four months programme is aimed
at developing the intellect, leadership and
managerial skills of officers, which would achieve
optimal professional capability of personnel.
Represented by Flag Officer Commanding Naval
Training Command, Rear Admiral Adeniyi
Osinowo, the Naval boss said, the programme is
in line with President Muhammadu Buhari’s
agenda to pursue a reform scheme for change of
attitude in all spheres of the national endeavour.
“In line with this change syndrome, the Chief of
Naval Staff has placed a high premium on
training as aptly captured in his mission
statement, which is to deploy a Naval force that is
well trained, organised and highly motivated to
discharge its constitutional roles professionally
and efficiently for the defence of Nigeria in
ensuring her economic prosperity.
“To this end, the CNS Strategic Directive 2015-1
was promulgated, which stipulated some strategic
objectives towards evolving new approaches to
combating the challenges of curbing various
forms of crimes in Nigeria’s maritime
environment and in other parts of the country.”
He pointed out that, within the specified time
frame, one of the key priorities expected to
achieve is promoting NN manpower development
to achieve optimal professional capability of
personnel, but advised the 60 trainees, who are
the first beneficiaries of the programme, to
utilise the opportunity and contribute
productively towards the greater development of
the nation, stressing that they are fortunate to be
selected to attend the course.
“You as senior ratings of the Nigerian Navy have
been selected for this course to prepare you for
higher leadership and administrative functions,
not only within the service, but also after
disengagement from active service. It is expected
that at the end of your sojourn here, you would
have acquired sufficient expertise and knowledge
needed to enable you contribute productively
towards the greater development of the nation.”
The Naval boss added, “for the first time, the
Nigerian Navy has concluded arrangements with
the University of Port Harcourt to formally run a
Diploma programme to concretise your
knowledge in man management and
administration. I’m confident that with the
caliber of academic staff from both the
University of Port Harcourt and the Navy, you
will benefit immensely from this course. I
therefore wish to encourage the Commandant,
the UNIPORT facilitators and the entire staff of
the School to endeavour to impart the best
knowledge to the participants,” he said.
Responding, Deputy Vice-Chancellor
(Administration) of Uniport, Prof. Anthony Ibe,
assured that the university is fully committed to
the partnership that sought to professionalise
and improve knowledge and skills of personnel.
The Head of the Naval School, Commodore Peter
Onaji also expressed optimum that the training
would boost performances of the officers, who
will be awarded Executive Diploma in Leadership
and management upon completion of the course.

Why We Want To Introduce Indian Education In Nigeria