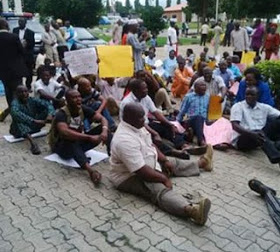 Osun lecturers sit on the floor in protest of their unpaid
salaries. They stormed the Osun State House of
Assembly today to protest nonpayment of their salaries
for the past 8 months. .
They’ve also been on strike for the past three months.
Armed with placards with various inscriptions, they
chanted, ‘Save our Souls’, ‘Enough is Enough’, ‘Pay our
Salaries’ and ‘We Reject Half Salaries’, and some anti-
government songs.
The irate lecturers said the plan of the state government
to pay workers half salaries was shocking because the
state had received its share of the bailout fund from
CBN.