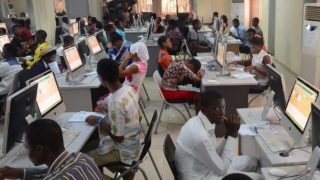 The National Security and Civil Defence Corps on Tuesday announced the arrest of a fraudster allegedly collecting N12,000 to register candidates for the 2018 Unified Tertiary Matriculation Examination in Lagos.
The Lagos State Coordinator of the Joint Admissions and Matriculation Board, Mr Sunday Aladegbaye, said the arrest was made possible through the collaboration of the men of the NSCDC.
According to him, acting on JAMB’s tip-off, men of the NSCDC, Lagos State Command arrested the fraudster who is alleged to be registering candidates for the 2018 UTME.

“One man (names withheld) was picked up at the Action Centre Junior Grammar School, Alagbado, in Lagos.
“The said fraudster was allegedly collecting N12, 000 per candidate for the registration.
“The fraudster is now in the custody of the NSCDC’s Lagos state command,’’ he said.
Aladegbaye reiterated the board’s commitment towards ensuring that the activities of fraudsters in the UTME were checked.
He lauded men of the NSCDC for partnering the board in sustaining the integrity of the examination.