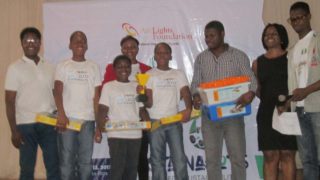 Winners-of-World-Robot-Olympiad-Nigeria on Saturday
Lagos State Model College Meiran and Araromi Ilogbo Junior Secondary, Oke Afo on Saturday emerged champions of the 2017 Nigerian edition of the World Robot Olympiad.
The News Agency of Nigeria (NAN) reports that the 2017 edition of the competition which took place at the School Hall of British International School, Victoria Island, was sponsored by Arclights Foundation for Educational Development and Improvement in Africa.
Arclights Foundation is the exclusive partner of LEGO in Nigeria and LEGO Education in West Africa, the organisers of the World Robots Olympiad, an annual event that draws participants from across the world.
LEGO Education organises a yearly challenge for the kids on how they can solve some problems on their own using robots made from LEGO plastic models.
The LEGO coach gets the annual challenge on the website and breaks it down to simple tasks that the children can understand and give those directions on how to solve them.
The kids on their own then brainstorm on how to solve the problem from the previous knowledge of the task; they also build the robots to solve the challenge given to them.
The sponsors of the competition, Arclights Foundation is the foremost robot designers in Nigeria.
By virtue of their performance at the keenly contested competition which tasked their creative intellect, the winners will represent Nigeria at the World Robot Olympiad scheduled for Costa Rica.
The theme of this year’s robotic competition is “Robots for Sustainability’’.

The Managing Director, ArcLights Foundation, Mrs Abisola Obasanya, told NAN that the World Robot Olympiad (WRO) had helped to build the students’ confidence.
She added that the competition was primed to assist the students to compete with other children in the world.
“Arclight Foundation is out to build 21st century children.We need generations of scientists that can impact positively on the society and that is why we are encouraging these young ones.
“We have been having good feedbacks from our efforts so far and within few years to come, we will reap the benefits.
“The project is work in progress, so we cannot be too hasty about getting sponsors, as times goes on, we will and everybody will be happy,’’ she said.
Mr Bayo Ibiyeye, Director, Lagos State Ministry of Science and Technology, told NAN that the Lagos State government was passionate about promoting science and technology in the state.
Ibiyeye, however, urged the organisers of the event to create more awareness about the competition to attract more participants from all over Nigeria.
In the same vein, Mrs Adebukola Iloanya, Head of Ace Doors Schools, said that robotic competition makes students critical thinkers.
“The children’s participation in the competition will help them to be problem solvers and precise. It helps the students to build a healthy competitive spirit.’’
Mrs Olabisi Ijimakinwa, Coach, Imperial Gate School, Lekki, said that the competition had exposed the students to the need for Science, Technology, Engineering and Mathematics (STEM).
The coach, whose school won the 2016 edition of the competition and subsequently represented the country in India, described the competition as a great exposure for the students.
“It was when I got there that I knew we had a whole lot of work to do,’’ she said.
The coach of one of the winning teams of the open competition, Akinola Ogbeyemi, said that it was challenging putting the winners together, adding that the winners gave their best.

“It is not easy getting them together because they are from different homes. I needed to get the consent of their parents and commitments of the students before we made it work.
“The winners are the ones who designed and implemented their projects . I only gave them the guide and they are good at it.
“I am so surprised to win because this is the first time that everyone in my team is participating in the competition and it’s a pleasure wining,’’ he said.
One of the Winners of the open competition, Olukoya Oluwatodimu said he and his team were excited wining the coveted trophy in their category.
Also winners of the senior category, Opoola Roberts from Lagos State Model College, Meiran, said: “I am happy to have won the trophy being my last attempt.
“I am very happy to win this competition at last because this will be my last time at the competition as I will be graduating to the upper class next session.
“My team emerged third place last year, but this year with a lot of determination, we were able to come first with the efforts of our tutors.’’
NAN also reports that other winners include EVS Solvers who emerged champions in the open competition, Robos Stomerz came second in the same category, while 125 Pound came third.
In the Senior Category, Lagos State Model College, Meiran, came first while Iwerekun Senior High School Lakowe, emerged second and Oke Afa Comprehensive College, Isolo, third.