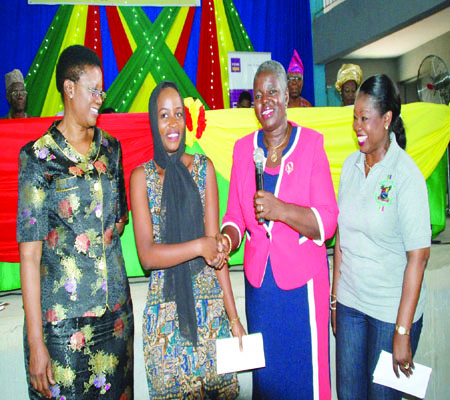 • Mrs Ariyo (second right) flanked by the
Permanent Secretary, Teaching Establish and
Pension Office, Mrs Sewanu Amosu (left); and
Mrs Jegede (right), while presenting to a
beneficiary, Togbeola Anuoluwapo (second left).
Very soon, there will be some form of empowerment
for artisans from the Lagos State government.
Permanent Secretary of the Lagos State Ministry of
Education, Mrs Olabisi Ariyo said this at the
presentation of bursary and local scholarship to
students indigenous to Lagos State last Wednesday.
Mrs Ariyo said the plan to extend the form of
scholarship beyond formal education to technical
and vocational education is a demonstration of the
government’s commitment to the development of all
aspects of education.
“The state government is committed to the
promotion of Technical Education and Skill
Acquisition in order to support and empower
brilliant trainees to be self-reliant. The proposal
to provide assistance for artisans such as plumbers,
mechanics, welders, etc…is in the pipeline,” she
said.
Bursaries of between N20,000 and N50,000 were
presented to 1,596 students attending various
tertiary institutions nationwide. Four hundred
brilliant students screened also got scholarships
worth N200,000 (for undergraduates), N300,000
(postgraduates) and N400,000 (PHD); while 192
students in the Nigerian Law School and Maritime
Academy, Oron were presented with N200,000 as
bursaries.
The bursaries and scholarship disbursed was worth
N282,560,850.
Mrs Omauton Jegede, Director, Lagos State
Scholarship Board, also said the Lagos State
government had approved the of release of funds
to pay outstanding bursaries worth N231,465,000 to
6,940 old beneficiaries.
She urged the recipients to make judicious use of
the grants to further their academic pursuit.
“Let me advise the lucky beneficiaries to make the
best use of this award. Do not see it as a meal
ticket doled out to you by the state government or
your own share of the state’s cake. Use the award
to empower yourselves towards excelling in your
studies. What we have done is to assist you to
achieve your goal of higher education and equip
you with the necessary skills and knowledge to be
able to attain your aspirations and ambitions in
life,” she said.
The students were presented with ATM Verve cards
of Skye Bank and FCMB. Some of the beneficiaries
were receiving for the first time, while were
collecting for the second or third time.
First time recipient, Simisola Tiamiyu, a 300-Level
Accounting student of the Lagos State University
(LASU), said the N25,000 she received would be
invested in a small business.
“The bursary is worth it. I can start up something
with this. I make clothes. I have decided to make
some and sell to my friends,” she said.
Another student, Sultan Danija, who is studying
Statistics at the Federal University of Technology
(FUTA), said he was collecting the bursary, worth
N30,000 for the third time. He praised Governor
Akinwunmi Ambode for approving the payment on
time.
“We were not expecting the bursary to come this
early after a new government was sworn in so we
are really happy. We thank the governor for the
timeliness,” he said.