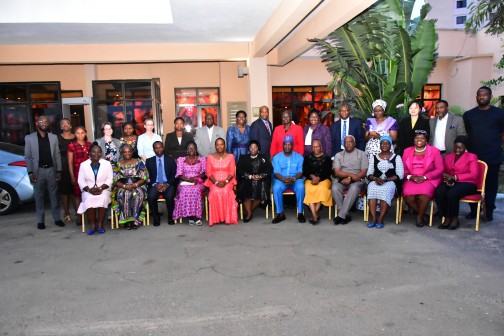 Lagos state Deputy Governor, Dr Idiat Adebule (middle), Chairman, State Universal Basic
Education Board ,(SUBEB) Dr. Ganiyu Shopeyin (6th right) DFID S/W Ag. Regional
Coordinator, Mrs Magaret Fagboyo (5th left) Representatives from Developing Effective
Private Education In Nigeria (DEEPIN) and other stakeholders in the education sector at a
2-day retreat on the review of the Lagos State educational agenda at Golden Tulip Hotel,
Featac on Friday, January 22, 2016
Lagos begins implementation Of 360 Degree new education policy
Published on January 22, 2016 by pmnews · 1 Comment
Kazeem Ugbodaga
The Lagos State Government has disclosed plans to implement new educational policy
initiatives to be called 360 Degree Education.
This, it said, would further promote the growth of functional and qualitative education
across the state.
This is in fulfillment of its campaign promise of improving infrastructure renewal in public
schools to make teaching/ learning environment more conducive for better performance.
Deputy Governor of the state, Dr. Oluranti Adebule said this at a two-day meeting/ retreat
held at Golden Tulip Hotel, Festac Town, Lagos, Southwest Nigeria on Friday.
The retreat was organised by the Department for International Development (DFID) and
Education Sector Support Programme in Nigeria (ESSPIN) to review the state’s
educational development agenda and opportunities.
Adebule stated that the new 360 degree educational policy when fully implemented would
make teaching and learning environment more conducive for total education of school
children, as according to her, the new model schools will be fully equipped with state-of-
the art learning facilities that will attract children to learn.
The Deputy Governor added that the newly approved school building under the new policy
would provide spaces for visual and literary arts, sciences, visual and expressive school
history, library and media centres, sports/ common space, ICT unit and other facilities
necessary for quality teaching and learning.
Adebule, who disclosed that the State Executive Council at its last meeting approved the
new policy for the state, added that government would ensure a significant improvement
in teaching methods and staff quality, including the introduction of technology-based
instructional tools to achieve better performance outcomes in all public schools in the
state.
While expressing confidence that the new 360 degree education policy was an initiative
that would raise the standard of education in the state, she assured that the state
government would not relent in liaising with notable quality education support around the
world to ensure success of its educational policies.
“The implementation of our 360 degree education policy will not be complete without
partnership with platforms such as Department for International Development, DFID;
Education Sector Support Programme in Nigeria, ESSPIN and the Developing Effective
Private Education Nigeria, DEEPIN, whose partnership and collaborations has been of key
importance to the attainment of modest educational performance outcomes in the state,’’
she stated.
While reaffirming government’s commitment to the implementation of sustainable
development of educational policies in the state, including adequate welfare for its
teaching staff, the deputy governor noted that the very huge amount allocated to
education in the 2016 budget was a demonstration of government’s desire for
improvement and positive change in the education sector, promising that the state
Ministry of Education under her watch would ensure successful implementation of
laudable educational programmes that would reposition the status of education in the
state.
Aderanti, while calling on all stakeholders in the education sector to double their efforts to
achieve government’s desire for success in the sector, urged members and leaders of
various Community Development Associations (CDAs) to join hands and support
government’s initiatives by ens uring adequate protection for schools infrastructure in their
areas so that government’s huge investment in education will not be a waste.
DFID, Southwest Acting Regional Coordinator, Mrs Margaret Fagboyo, stated that the
two-day retreat/ meeting was organised as part of the measures to help the state to
achieve its Sustainable Development Goals (SDG) in education, which she noted was very
crucial to the attainment of other developments.
She said her organization would continue to support the state government in the planning
and implementation of its policies in education because of its important position as a role
model state in the country.