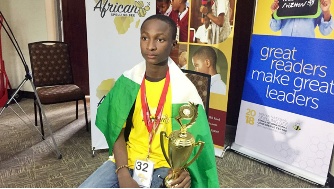 A student of Kings College, Lagos, Sheriff Muhammad Oluwatobi, is the best speller in Africa after emerging champion in the African Spelling Bee competition of 2017.
Sheriff was part of the team of spellers who represented Nigeria in December at the African Spelling Bee 2017 held in South Africa. He was followed by another Nigerian, Benebo Nchege of Deeper Life High School, Port Harcourt in a joint second place with Zameer Dada of South Africa.
Both Sheriff and Benebo competed in the Nigeria Spelling Bee and excelled in their respective states and regional competition and went on to become national finalists. Benebo clinched the title of National Champion in the finals held at Nile University, Abuja.

As part of prizes won in the competition is a full scholarship to Monash South Africa worth $20,000. Monash South Africa is ranked among the Best 100 Universities in the world. Other prizes include promotional items sponsored by MTN, Makro and Planet Fitness, and a cash prize of 500Rands.
The 16-year-old is the current Vice School Captain, Academics and a SS 3. Speaking at the second King’s Men Series entitled ‘The Person of Impact,’ a motivational session for graduating Class of 2017/2018, which was also an opportunity to unveil various sports laurels/cups won by the school in the outgone year, the Director/Acting Principal of the college, Mrs. Elizabeth Ibezim, described the achievement as worthy of commendation.
She said the school as a beacon of light is expected to shine in all facets of life. “The students of this college are expected to shine and measure up to expectation in whatever they do. As young people, this is the time when you need to fully concentrate on your studies. You can only become a person of impact if you become great in life. I urge you to muster more strength to achieve more results in the future.”

3 things you must get right when applying for 2018 UTME