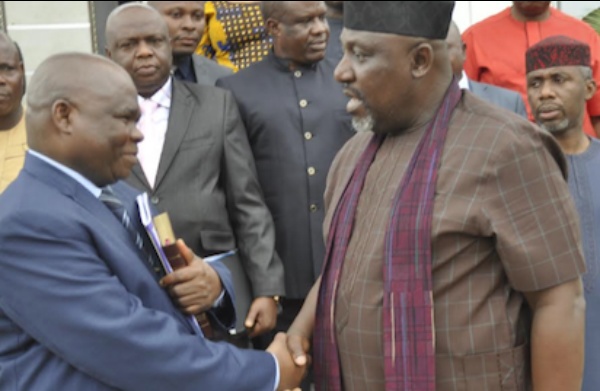 The Imo State Governor, Owelle Rochas Okorocha has said that the State needs not less than 20 Universities to take care of the teeming population of qualified JAMB applicants from the state who are yearly denied admissions because of certain unfavourable polices like catchment areas and limited admission spaces.
Governor Rochas Okorocha receiving the founder of LORDS CHOSEN CHURCH Pastor Lazarus Muoka when he visited him at the Government House on courtesy call, on Friday, March 23, 2018.

The governor spoke when the Founder of the LORDS CHOSEN Church, Pastor Lazarus Muoka visited him on courtesy call at the Government House, with other leaders of the church on Friday, March 23, 2018, to inform the governor that his Church has come to establish a World-Class University in the state.
The governor also directed that land should be allocated to the Church immediately for that purpose and also gave the Church Ten Million Naira (N10m) to enable them clear the site of the intended University, with the governor stating that for the seventh (7th) time, the state has continued to lead in JAMB applications with wide margin.
He noted that in 2018 for instance, the state also topped the JAMB application chart with 92,980 applications and added that out of this number, it would be surprising to see more than five thousand applicants having admissions into the universities because of certain policies and grossly limited slots.
The governor remarked that since 2012, the state has been recording between 131,000 and 92,000 applications in JAMB to be leading in that regard, but regretted that the number that is always given admissions would always be like a pin thrown into an ocean, and that is why the state needs as many universities as possible to offer these young ones the much needed admissions.
The governor said that education is the biggest industry in the state and assured Pastor Muoka that the state would support the church to ensure that the university is started and finished for academic activities to begin.
In his speech earlier, the leader of the LORDS CHOSEN Church, Pastor Muoka told the governor that they want to start the University and complete it without delay and asked for the support of the state government.
He commended what he described as the amazing transformation of the state especially, the State Capital by the governor and the Rescue Mission Government in the state.
He prayed that God would continue to use the governor for the good of the State and the society at large.