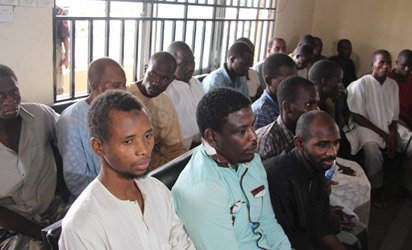 BOKO Haram has thrown down the education sector by attacking schools and recruiting children into their ranks to carry out acts the sect deems fit, which in most cases involves their death or exposure to circumstances that should never be privy to the eyes of an adult and worse, a child. As luck would have it, there has been positive news on the crippling of the sect that has troubled the nation for over four years, but more still needs to be done to completely bring the sect to non-existence.

More importantly, more needs to be done to ensure that; for no reason would the education sector, schools and children be vulnerable to such attacks and indoctrination to join the ranks of deadly sects. In this light, the suggestions of Professor Peter Okebukola, Chairman of Council, Crawford University, Igbesa, Ogun State, while delivering the 10th Convocation Lecture of Covenant University, Ota, Ogun State, titled Higher Education and Africa’s Future: Doing What is Right, are brought to fore, to serve as a guide and reference point for educationists and stakeholders in securing the nation, particularly children, from Boko Haram and any form of insurgency or criminal groups that may come their way, even violent cult groups. Excerpts……

Curriculum: I begin with the curriculum and suggest some toning up of the basic education curriculum to which all 6 – 15 year olds are exposed. Boko Haram is about ideology and indoctrination. Education is a powerful tool for ideology change and indoctrination. We should draw on the potent and positive power of education to counter the jihadist messages of the insurgents.

The Nigerian Educational Research and Development Council which is charged with curriculum development and renewal should embed topics in all subjects in the basic education curriculum that can steer Nigerian children and youth away from religious violence and jihadist tendencies. The message of religious tolerance should hit the children from all sides in every subject they learn and every day in school. The school anthem should contain a line or two which promotes temperate living.

Teachers: The next step is that teachers should be trained in efficient and effective ways of delivering the religious tolerance entrenched curriculum. It is essentially training in the pedagogy of socio-religious and ethnic tolerance. We propose long vacation training, the conduct of such training should be every two years.

Another angle of attack through education is to invest in child-friendly schools. The logic is that if children are taken off the streets and feel safe and happy in school with a pleasing environment, the long hands of Boko Haram may not catch up with them. Child-friendly schools will meet the psychosocial needs of the pupils and they will be encouraged to attend. When in school, the children can then be dosed with curriculum suggested earlier for countering the jihadist messages of the insurgents. Key words in this effort are counter propaganda in schools at full blast.

We need schools to compete in demonstrating that they are the least amenable to Boko Haram incursion. Here, state and national competitions should be established for the best schools that promote harmony and tolerance, and schools that best deliver anti-jihadist and anti insurgency messages and practice.

Entrepreneurial education and wages: Boko Haram feasts mainly on idle hands as recruits, paying them much more than the national minimum wage. We should step up the delivery of entrepreneurial education at all levels of the educational system so that products of basic and higher education are better tooled with work. Government should offer wages that Boko Haram will find difficult to beat and more importantly constrict and strangulate the sources of funds for the jihadists.

Varsities thrust: Narrowing to universities, the tasks have at least six thrusts. First, we need to rework the General Studies curriculum to ensure inculcation of socio-politico-ethno-religious tolerance. Second, we should re-jig teacher education curriculum in a way that all Faculties of Education should prepare a new breed of teachers who are able to foster ethno-religious harmony in our schools. Thirdly, six universities, one in each of the geopolitical zones, should be kitted for research and development in weapons and surveillance systems.

The fourth trust is to strengthen the delivery of peace and conflict studies in the universities. There are some centres addressing this theme dotted all over the university system. More of such centres should be established and a coordination mechanism set up to be jointly run by the Institute of African Studies University of Ibadan and its equivalent at Ahmadu Bello University, Zaria. These centres should evolve what can be labelled next-gen methods in peace and conflict resolution.

Fifthly, the Association of Vice-Chancellors of Nigeria (AVCNU) should partner the National Orientation Agency as well as State and Federal Ministries of Information to conduct advocacy in major Nigerian languages in conflict prevention, mediation, resolution and peace building.

The final thrust of the role for universities focuses on the Police University. There are several issues with the Nigeria Police often calling for the massive reform of the system to improve its internal security apparatus. The management of the Nigeria Police Academies and Police University should take urgent steps through training at the officer and other level to work towards producing a new breed of cops for an envisioned Nigeria.

#250MillionReasons to Invest in Education