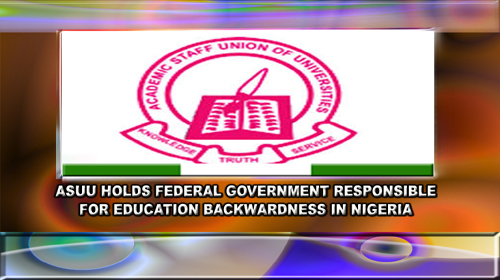 The Academic Staff Union of Universities, has
accused the Federal Government of being
responsible for the backwardness of education in
the country which had affected its global rating.

ASUU lamented that instead of the budgetary
allocation to improve, it was only reducing and
called on the government to commence the
process for the payment of six hundred and
twenty three billion naira, being backlog of earned
academic allowances and funding of universities.
National President of ASUU, Comrade Biodun
Ogunyemi, while briefing journalists in Abuja, also
kicked against the proposed plan by the federal
government to scrap the post-University
Matriculation Tertiary Examination, saying the
Joint Admission and Matriculations Board, JAMB,
could not admit students for universities, saying
that the decision did not serve the interest of
Nigerians.
He frowned on the alleged continuous breach of
various Memorandum of Understanding, signed
between the government and ASUU between 2009
and 2015, adding that the Federal Government
was in arrears of four hundred and ninety five
billion naira as at the first quarter of 2016, in
respect of the NEEDS assessment fund for the
revitalization of public universities.
Comrade Ogunyemi warned against undue and
further delay in the implementation of various
agreements signed between both parties.

Save is from the Hands of Jamb and Mr.Adamu Adamu