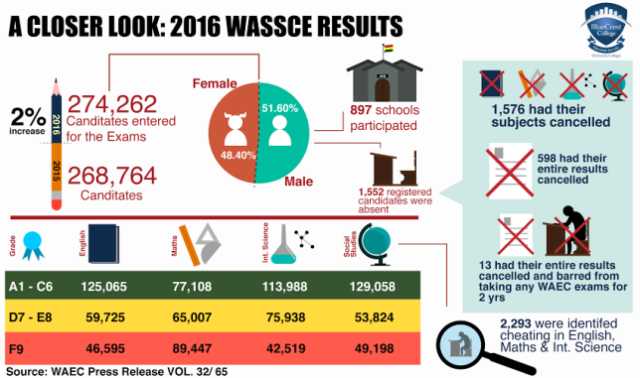 ​The longstanding argument over whether a three-year

or four-year duration for the senior high level is the

best for the country has been reignited with the

release of the 2016 WASSCE results.

Vice president of the National Association of

arguments over a four-year or three-year senior

The longstanding argument over whether a three-year

or four-year duration for the senior high level is the

best for the country has been reignited with the

release of the 2016 WASSCE results.

However, Mr. Karbonu, in addressing the issue on Citi

“We are beginning the issue on this parochial

argument of four years, three years. It is totally a

misplaced argument,” laying emphasis on the need to

concentrate on the basic levels of the educational

“If somebody does not get the proper knowledge in

English language from the basic level, you can even

move to the PHD level, when you talk, there will be

deficiencies in your presentation,” he explained. Mr.

Karbonu also bemoaned the fact the discussion had also

been spliced with political rhetoric. According to him,

“The statistics that we have is totally different from the

tangent that we have discussed this issue and once

again, we have also jaundiced this discussion with

is not new in the Ghanaian context.

“we have always performed abysmally at our school set

level,” he maintained. “So for results to be released in a

particular year and for people to begin talking about it as

if Armageddon is all of a sudden befalling us has

He added that “the performance in core subjects such

as science, English language and mathematics have

According to the statistics from the West African

Examination Council, a total of 274,262 candidates