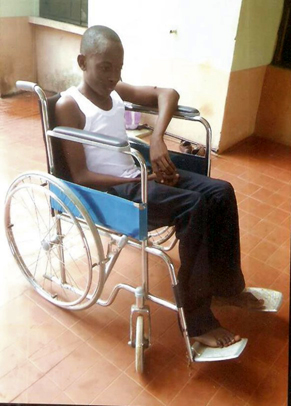 UNTIL a few months ago, Mr. Ejiro Diachevbe
was a 300 Level student of Economics and
Statistics at the University of Benin (UNIBEN),
Benin City, Edo State. His dream of becoming
a graduate this year now hangs precariously
after he was diagnosed with a rare bone
ailment.
A consultant at the Department of Orthopaedic
and Traumatology, University of Benin
Teaching Hospital, Dr A.O. Ogbemudia
explained that the 22-year-old student’s
suffers from a medical condition known as
avascular necrosis.
After a series of tests and X-ray, the medical
report revealed that he is suffering from
avascular necrosis of the right hip joint which
requires a N4 million corrective surgery before
he can pick up the pieces of his life and move
on.
Explaining his situation, the young, promising
undergraduate who is now mostly confined to
a wheelchair recalled that his travail started
when he felt “a sharp pain in the hip” around
2014.
“When I felt the pain in my hip, I went to the
Health Services Department of the university
(UNIBEN). I was treated and I went home. But
the pain remained unabated and I had to
return to the health service department days
later.”

On his second visit, the doctor recommended
an x-ray for further investigations. “It was
when the x-ray result came that I was told of
a disease I didn’t know exists,” Diachevbe
said.
The finding revealed: “There is some deformity
with flattening of the right capital femoral
epiphysis associated with partial
fragmentation. The iliac, pubic and ischia
bones are intact. Findings are in keeping with
avascular necrosis of the right femoral capital
epiphysis.”
Diachevbe said: “When I took the x-ray report
to the consultant at UBTH, he said I had
avascular necrosis and required surgery to
correct. He said the surgery would cost N4
million. I went online and discovered that the
disease has to do with compromise of blood
flow to the hip joint, and can be caused by
abuse of drug and alcohol.
“The only drug I take without doctor’s
prescription is anti-malaria drug, which
everyone takes. I am a Christian and have
never taken alcohol; I am still wondering how I
got this disease and I pray to God to rescue
me.”
The life of the bubbling young man has been
changed by the diagnosis. He explained that
the huge cost of examination and treatment
had drilled a huge hole in his parents’
finances. His academic pursuit is also on the
verge of being placed on hold because of his
inability to keep pace with lectures and other
activities.
In a voice laced with emotion, one of his close
friends who asked not to be named told The
Nation that Diachevbe had already missed
second semester examinations which were
concluded in December, 2015. “We have tried
to assist him in the few ways we could, but
there is no way we can read and write the
exams for him.”
For Diachevbe, the only choice left is to put
his education on hold while he battles for his
life.
He said: “For the past five months, every
Thursday I go for checkups at the Outpatient
Clinic of UBTH, and each time I go for
checkup, it is either I am told to undergo one
x-ray or the other. Each x-ray and laboratory
test cost N15,000, apart from the drugs. My
condition has drained my parents’ savings.
“As it is customary, students referred from
UNIBEN health centre to UBTH are usually
given credit facility card, but the university
denied me the opportunity because they said
surgery is beyond what UNIBEN can finance.
“I have taken my appeal to NGOs and other
civil organisation groups, but nothing much
has come out from it. I am about to defer the
admission so I can source funds to undergo
the surgery and return to school. My course-
mates have really been helpful. They come
here to cook for me and do other domestic
chores. I find it hard to go downstairs to get
water. So, when students are in the early
hours of the day rushing to take their bath, I
wait for them to finish and go to class before I
use the bathroom.”
Ejiro Diachavbe can be reached on telephone
no: 08172588742.