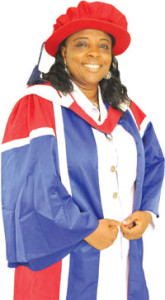 The Anambra State Commissioner for

the University of Nigeria, Nsukka (UNN),

revive the deficient reading culture in

the country and the Igbo language.

He is also launching the book, titled ‘Uwa

world around us’) is aimed at teaching

school children at all levels about their

According to Omenugha, the Igbo science

book is a welcome development as the

ministry is doing all it can to promote the

Igbo language and culture. “We have

appointed a desk officer for Igbo

Language and culture and designed

trainings for Igbo teachers both in

“would go a long way to help entrench

the love of the Igbo language and culture

Explaining the rationale behind the book,

knowledge and understanding of the Igbo

language around the country was the

to cover certain concepts in science,”

He further stated that the environment

is made up of plants, animals and

minerals. “What are plants; you say

‘Osisi.’ What are minerals? You say

and branches and produces leaves,

flowers and seeds or fruits. But

mushroom is osisi; however, it doesn’t

have green leaves nor does it produce

flowers and fruits. If we think of

anumanu, you have birds that fly and

mammals that suckle their young ones but

plasmodium and bacteria if they are

animals do not have the simple animal

characteristics such as eggs, embryos and

so on,” Okigbo told LEADERSHIP Weekend.

According to him, it took a lot of

creativity and innovation to suggest

solutions and provide answers to these

problems. “I had to divide plants in two

groups – ‘osisi dum’ (all plants) which

kpam,’ which have green leaves, flowers

and seeds. I did the same with animals so

some of the other micro-organisms are

a former Deputy Director-General at the

Nigeria: Unicef to Spend N108 Million On Education in Zamfara

Jubilation at Education Ministry as Adamu takes over