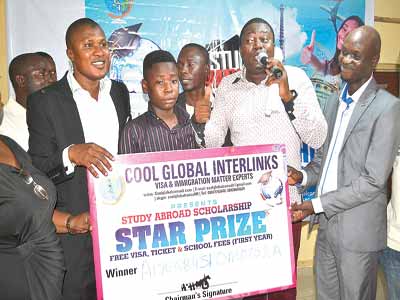 Interlinks, has given back to the society

through its Corporate Social Responsibility

At the occasion, which held in Akure last

weekend, the chairman of Cool Global

the society and refrained from what they can

get from the society.

Ismail said the programme was initiated to

serve as a motivation and encouragement to

whose parents could not afford the required

He disclosed, during the maiden edition of the

company’s scholarship award scheme, that the

students to study in Cyprus, India and other

abroad to be good ambassadors of the country

and ensure that they return to Nigeria after

their courses to contribute their quota to

In a brief aptitude test conducted for over 100

candidates for the scholarship and monitored

by panelists among the crowd present, a 17-

Ismail, as spelt out in the terms of the

The chairman of the occasion, Muyiwa

Ademola, a Nollywood actor, lauded the

management of Cool Global Interlinks for

initiating such welfare and humanitarian

He said the initiative would afford many

ones, the opportunity to study abroad and

urged government at all levels to give

education atop-most priority so that Nigerian

graduates can be self-reliant and compete

favourably with their global contemporaries.

Muyiwa, who also presented the award to the

winner, reminisced on how he abandoned

education to take up acting as a career at the

early stage of his life.

Nevertheless, Muyiwa explained that he later

went back to the university for his degree

programme when he discovered that the little

education he had then could not sustain him

or meet up with the challenges of his life.

I graduated almost at a belated stage of my

life. I couldn’t further my education when I

left secondary school because my parents

were not that rich. I later went back to

university because of the importance of

“I discovered that the little education I had

could not sustain me and meet up with the

challenges of my life. Education is the key of

life and the secret of human success. For you

to be somebody in life you must be educated.”

He promised to feature the beneficiary of the

award, Aiyebusi, in his next movie, part of

which he said would be shot in the United

States of America, Ghana and Australia.

Why ADSU VC was sacked - Commissioner for Higher Education