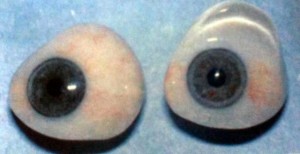 uthorities of Ahmadu Bello University
Teaching Hospital (ABUTH), Zaria, Kaduna
State, on Thursday, promised to get artificial
eyes for the three-year-old boy, Sadiq
Usman, whose eyes were plucked by yet to
be identified persons.
Usman lost his two eyes to persons
suspected to be ritualists in Zaria, Kaduna
State, recently.
The Chief Medical Director (CMD) of ABUTH,
Prof. Lawal Khalid told the News Agency of
Nigeria (NAN) in Zaria that the hospital had
the expertise to carry out the replacement of
the eyes.
He said “this is not the first time such
replacement is carried out in the hospital, as
such, it is not something difficult.
“The artificial eyes cost less and it is
accessible anytime the need arise,” he said.
On the preliminary surgery carried out on the
boy at the hospital’s Ophthalmology
Department, the hospital boss said that the
victim was responding to treatment.
He explained that the surgery was aimed at
reshaping the boy’s face as it was disfigured
by the suspected ritualists in the process of
removing the eyes by force.
He said that “in the long run, we will replace
the eyes with artificial ones to interrupt any
possible disease but the boy will no longer
see because the sight is already gone.”
He said the artificial eyes would be changed
periodically, commensurate to the size of the
victim as he grew up.
Responding, the boy’s father, Malam Usman
Usman, popularly called “Auta” thanked the
public for the support and prayers.
He specifically thanked the Emir of Zazzau,
Alhaji Shehu Idris, Sen. Shehu Sani (APC
Kaduna Central) and Gov. Nasiru El-Rufa’i of
Kaduna State for supporting the family in the
treatment of the boy.