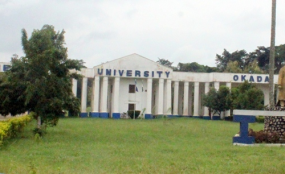 ​Eighty-six students of Bauchi origin who are on state

State, risked being sent out from the university due to

Sixty-four of the 86 students are studying medicine

and medical-related courses such as pharmacy,

The scholarship programe was initiated by the past

The affected students, in an email sent to PREMIUM

that the school was tired of their indebtedness, and

“We have been subjected to all kinds of humiliation,

embarrassment and psychological trauma because

every day we are being told we are defaulters who are

reaping from the tuitions paid by other students

especially those not under any scholarship,” the

students said in the mail sent on their behalf by one

Although the scholarship programme covers their

welfare as well, the students said they resorted to

begging on campus for survival, since they had not

received upkeep allowance for two years now from the

“Please we need help. We want Nigerians to help us

and save us from being pushed out of the campus,

and also save our future,” the students pleaded.

confirmed to PREMIUM TIMES that the affected

students had not paid their tuition fees for three years

Mr. Okoro said, “For God sake, this is a private

university and not a charity organization.”

The university may soon take the “ultimate option” of

sending the students away from the campus, the

He said the school had approached the Bauchi

government several times on the issue, without getting

“It is not a normal thing to allow students seat for

examinations without paying their fees. But we gave

that consideration to the state government’s

candidates because they are from corporate outfits.

“Our private students are not allowed to write

examinations when they don’t pay their fees. We have

students from the federal government amnesty

“Of course you can’t treat corporate clients like you

treat the private students; a government is a

government. But on this case, the government has just

refused to act; nobody is talking to you despite several

ranked as the overall best student in the university,

will be among those to withdraw from studies, when

the university eventually decides to shut its door

against the affected students.

this newspaper, said the scholarship programme

wasn’t a bad investment at all for the Bauchi

Besides Mr. Abdulwahab who the registrar said is

classified as a scholar, the other Bauchi students have

also excelled in their respective classes.

One of them, a female sophomore student of medicine,

Also, 16 of the students have so far made it to the

First Class level, while many of them are within the

When PREMIUM TIMES contacted the Permanent

Yalwa, he said the problem was inherited from the

Mr. Yalwa explained the effort the government was

making to settle the problem.

“Last time, about two months ago, the officials of the

Igbinedion University came to Bauchi and we

discussed with them and my Honorable Commissioner,

and since then we have processed the case, and we

are just waiting for the release of the fund which I

believe will be very soon,” he said.