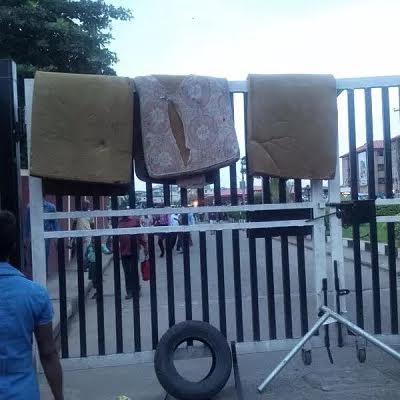 Students of the University of Lagos (UNILAG) on
Monday, gave the school authorities a seven-day
ultimatum to replace all mattresses in their hostels,
to avoid crisis.
DAILY POST reports that following the protest by
students on Monday over invasion of bedbugs
and mosquitoes in their residential halls, the
President of the Student Union Government
(SUG),UNILAG, has called on the management to
come to address the matter urgently.
The President, Abayomi Martin said: “The
authorities must not always wait for a crisis or
protest to erupt before they react.

“We want this management to be proactive in
responding to the demands of the students
because this issue has been brought before the
authorities before now and nothing was done.

Martin further said that there is a limit to which
students can bear.
“I feel what they were protesting against is not
out of place, because we (the students) paid for
it. Actually, the whole place was fumigated
recently, but it seems the bugs have developed
resistance to the chemical,” the president noted.
“Also, as far as I can remember, the halls in this
school were fumigated in 2012, when we were to
host the National Sports Festival,” he added.
“So, what we are asking for now is for the
authorities to look for a lasting solution to this
challenge.

“We want them to burn all the old mattresses,
fumigate the hostels, do away with all the
fittings, and then bring in new mattresses.
“We hereby give them a seven-day ultimatum,
beginning from today, to replace all the old
mattresses,” Martin stressed.

Nigeria: Why We Established Centre for Igbo Studies - UNN VC