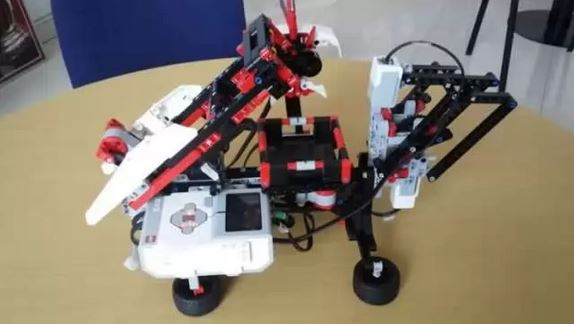 A twenty-four year old Nigerian, Bobai Ephraim
Kato, has built a fully functional artificial
intelligence robot for his final year project at the
International College of Business and
Technology (ICBT) in Sri Lanka.

After his secondary school education in Nigeria
in 2009, he wrote JAMB exams twice trying to
get an admission into Ahmadu Bello University
(ABU) Zaria to study medicine, but all to no
avail. He couldn’t get into the remedial school
at ABU, and Kaduna State University (KASU) did
not accept him either. It was not until he started
a program at KASU’s remedial school that
opportunity presented itself through the NIIT
(National Institute of Information Technology)
scholarship exam. Kato’s success story took
shape over the next four years as he eventually
ended up in Sri Lanka and studied Software
Engineering.
Kato admits that the idea of artificial
intelligence was random. The knowledge he
gained from previous classes on Artificial
Intelligence Systems set the pace for his work
with the robot. His first work with Artificial
Intelligence was “Wine Quality Test”, a piece of
software which uses artificial intelligence to
determine the quality of wine. When the
directive came to his class to create software
that uses Artificial Intelligence for predictions
and solutions, he couldn’t think of anything. It
was not until he did some research that the idea
of a robot, which could solve puzzles struck him. A Nigerian Software Engineering student, Kato
personally built and developed the algorithm
that enabled the robot to solve a Rubik’s Cube
in a matter of minutes – a feat he admits to
have never achieved himself.
Kato, who hails from the Atyap tribe in Karina
said, “ My first 5 tests were a failure. The robot
always shot a scanning error, and this was a
week to my final submission. All I could do was
pray. I didn’t know what to do again. I was
confused and restless. I kept grinding and it
finally started working. At that stage, the robot
wasn’t intelligent enough and I had to train it to
solve many puzzles to get more skills to save in
the database.”
Kato spent two nights building the robot. After
construction, he installed the software which
served as the brain into a memory card for
testing. A week to Kato’s final submission, the
robot was still not functional. It took six tries to
get the robot to work, and then a few days to
increase its intelligence quotient. It was hard
work for Kato, as he could not solve the Rubik’s
Cube himself.
In the spirit of giving back, his new focus is on
forensic computing, cyber security, and digital
investigation, which he hopes to put to full use
when he goes back to Nigeria.
“I’m happy to return back to Nigeria as a Cyber
Security and Digital forensic Tech,” he says. “If
anything, that’s what Nigeria needs more. We
need people who are savvy and sincere in Digital
Investigation, Cyber Security and Forensic