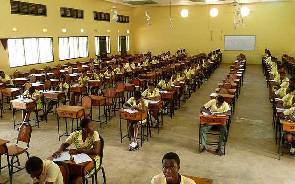 ​Statistics and data available indicate that results of

Certificate Examination (WASSCE) have witnessed a

significant improvement but there is still more work to

be done, Dr Ahmed Jinapor, a lecturer at the University

of Education, Winneba, has said.

Concerns have been expressed by chiefs, politicians

and educationists about the 2016 WASSCE results

According to WAEC, only 53.19 percent of students

who sat for the WASSCE passed in English, with only

Additionally, only 48.48% of students secured passes in

students who sat for the examination obtained the

institutions.
Although some Ghanaians believe these results are the

worst in recent years, Dr Jinapor said the outcome of

the 2016 WASSCE was an improvement on previous

years’ though he was quick to add that the marginally

better performance of students was still not the best.

Speaking on TV3’s New Day on Saturday August 13, he

some improvement. The data shows that there has

been an improvement, but, like it or hate it,

notwithstanding the improvement that we have chalked

within the past years using 2016 as a reference point,

the result is not the best because we are talking about

move onto the next stage.”